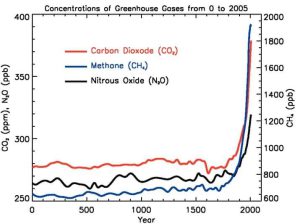 Over the last few years, there have been talks that rice cultivation will increase the amount of methane in the atmosphere. Although rice cultivation plays a very small role in methane emissions, the propaganda is designed to cover it up and obscure the real cause. The main argument put forward is that the promotion of rice cultivation should be stopped!

There is no doubt that methane is one of the most important greenhouse gases causing global warming. The main sources of methane naturally being released into the atmosphere are wetlands, seas, livestock, termites, and spaces where methane hydrates are produced naturally. Methane is mainly released from stagnant water bodies under anaerobic conditions. Methane is released during the decomposition of biomass by the action of microorganisms in the absence of oxygen in the water.

Most of the methane is emitted from the industrial sector itself. The oil and gas sector emits an average of 84 MT/Yr, through coal mining 44 MT/Yr, from waste deposits 68 MT/ Yr and from dairy farms and meat production on average 115 MT/Yr. Approximately 60 percent of total global methane emissions come from these anthropogenic sources. (Source: UNEP)

Methane, which remains in the atmosphere for only a short time compared to carbon, has been on the rise in the world since the Industrial Revolution. Till year 1700 it was just 700 ppb (parts per billion) which now exceeds to 1850 ppb. On average 571 MT/ Yr of methane is getting trapped/ destroyed (Sinks) each year, which is enough to sink methane (approximately 397 MT / Yr) from wetlands and rice fields each year. To make this even clearer, let’s look at the graph before the Industrial Revolution.

Before the Industrial Revolution, wetlands, living organisms, and other natural sources emitted carbon and methane, but it never increased above the threshold to cause damage to the earth. It used to be recycled by its natural biogenic carbon cycle. Methane levels in nature have not increased excessively, despite the fact that man continued farming practices, including rice cultivation. Methane has been increasing exponentially in the atmosphere over the past three centuries. In these three centuries, 87 percent of the wetlands have disappeared, globally. In last few years, the wetlands in Kerala have declined by 50 percent while in last 40 years, 80 percent of rice cultivation has disappeared in Kerala. Yet methane levels continue to rise. Then it is clear that the main reason for methane emissions is not only wetlands and rice fields.

It should also be noted that aerobic condition rice fields do not produce significant methane, especially in rainfed areas. Even if rice cultivation has increased in Asian countries the increase is relatively small compared to the loss of wetlands in the past.  Rice cultivation contributes only 8% to human-caused methane production.

Wetlands and rice fields perform many ecological and social functions, including carbon sequestration, reduction in soil erosion, ground water recharge, flood prevention, agriculture and fisheries that are a way of life for many people. Methane emission should not be reduced by eliminating the rice cultivation. It is the lack of these wetlands and rice fields many areas suffer from problems including floods even after a light rain!

Instead, efforts should be made to prevent methane leaks from the industrial sector, including gas production, fossil fuels, coal mining, large-scale dairy, meat production, landfills, and other waste sources can be reduced.

When talks are in the air that Rice cultivation should be reduced, It’s like saying that human beings should stop breathing because of the increase in carbon emissions!!